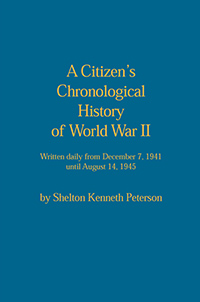 This is both an historical document and a family treasure. Written daily during the full course of World War II, our father, Shelton Kenneth Peterson, gave insight to what the war was like on the home front. Here is a record rarely seen.

The following is from Owen Peterson's Preface:

"The original manuscript of Dad's journal history of World War II lay undiscovered in a bank safety lock-box for many years. We all worried that it may have been lost during Mom's move from San Mateo to Bella Vista, California in 1995. It wasn't until after Mom's passing that the lock-box was discovered and opened, revealing the old type-written manuscript.

"During the process of typing what now represents over 900 pages of journal history, I was taken back to those long-ago days when I, as a very young boy, lay in bed observing my seldom seen father across the hallway typing away on the old vintage typewriter late at night, night after night. This book is a testament to the fact that he never missed a day, for 1345 days, sitting at that typewriter, no matter the hour, and regardless of how tired or sick he might have felt." (actually one day is missing)

~ from the author, Shelton Kenneth Peterson

The compilation of the historical record as it appears in the following pages was begun on December 7, 1941 and was finished three years, eight months, and seven days later on August 14, 1945. As the bombs were falling on Pearl Harbor and as he (I) contemplated the dramatic impact of that "Day of Infamy" on the life of every human being, the author decided that it would be exceedingly interesting and perhaps valuable from an historical viewpoint, to record the course of the war as it unfolded chronologically in the life of one American citizen.

Accordingly, he (I) began compiling a daily record of the war as it was revealed through the mediums of newspapers, radio, and personal experiences; a daily record that was kept faithfully despite numerous obstacles ranging from eighty hours of grueling work each week during the early months of the war, to sickness and inertia. Many times the day's events were entered in the written record at two o'clock in the morning after a hectic day at the office or in bed when the "flu" laid him (me) low. Needless to say, the task seemed endless—the war would never be over—and then, as dramatically and suddenly as it began, came the atomic bomb and V-J Day.

Ken was born on 1 February 1911 to Minnie Lee Harkin and Charles Mauritz Peterson in Salt Lake City Utah. In (high school) ROTC he became a captain and received a medal for marksmanship. He graduated from high school at 17 years old and took a job with the Federal Reserve Bank in Salt Lake City. He began as a messenger boy and when he passed away in 1970 was a Department Head of Bonds and Redemption. He worked for them for 42 years. Early in 1941 he received a promotion at the bank and they moved to San Francisco, California. On December 7, 1941 the Japanese attacked Pearl Harbor in Hawaii and that is when he decided to chronicle the war. ~ from Joyce Clark's Biography