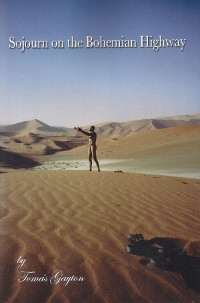 Sojourn on the Bohemian Highway

Tomás was born and raised in Seattle, Washington, the grandson of African American pioneers. He began writing verse soon after graduating with a Juris Doctor from the University of Washington. Tomás is a Civil Rights attorney/activist and world traveler who lives in San Diego. His poetry is his life in verse.

His words appear in various publications and literary journals. Tomás' most recent volume of poetry is Vientos de Cambio/Winds of Change, published by Poetic Matrix Press. Others include: Yazoo City Blues, Time of the Poet, Dark Symphony in Duet with the late Sarah Fabio, and Two Races, One Face, with John Peterson. Tomás' work is also featured on his website www.sambajia.com.

"Gayton advances the development of investigative poetics in his new work, especially in the 'Safari Song' section that focuses on the new South Africa. The worldwide presence of this highly conscious African-American poet in the new millennium contributes to positive prospects for the future of humanity."

- David Henderson, De Mayor of Harlem and Neo-California.
His bio of Jimi Hendrix is available in a recent new edition.

Sojourn on the Bohemian Highway is the peripatetic poets' travelogue in prose and poetry in the tradition of W.H. Auden's "Letters From Iceland." Tomás paints pictures with words as he travels the world on the open road. With him you witness life in the Afro-Caribbean and in the womb of Mexico. He takes you on a safari in Mama Africa that rises onto the ethereal heights of Mount Kilimanjaro. Tomás' journey reflects on themes of social injustice and spiritual catharsis. The world he shares with you is always colorful and full of life's melodies and rhythms. Join Tomás in his sojourn for peace and justice in a strife ridden world.