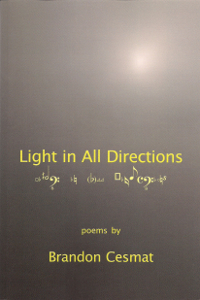 Light in All Directions

"Light in All Directions is a remarkable piece of writing written as it is with an amazing closeness to death. Sometimes, as in 'Tongues of Dust,' it is from right inside death. 'At the wake, they won't stop saying my name. / That's the point, I guess, to keep me from drifting too far.' Sometimes it is the death caused by fire or bitterness or loss. But as you read, it does not harm you, instead you are fearful for him, for how far he has entered places we should not go. Brandon's writing is so sure and so honest you are willing to go where he takes you knowing he will leave you with something of value, difficult though it is.

"Brandon Cesmat writes in these engaging poems about the peril of family values and of Ronald Reagan sitting up in his casket to salute his victims. A pacifist well aware of the dollars that float on the currents of blood, he is a man who sees the comic irony in shooting space creatures on his son's X-box and who honors the Lion of perpetual compassion as he recalls the impoverished braceros of his youth and eulogizes the last Channel Island fox, Alameda whipsnake and leatherback sea turtle. These are poems that shed light in all directions."
— Steve Kowit

Brandon Cesmat teaches literature and writing at several colleges in Southern California. His first book Driven into the Shade received a San Diego Book Award. His short story collection When Pigs Fall in Love & Other Stories is from Caernarvon Press. He is an active teaching artist in California Poets in the Schools (CPITS) and an active member in Teaching Artists Organize (TAO).

Cesmat harvests brush every summer with his wife and their three sons at their home just above Paradise Creek in Valley Center, California.

From Light in All Directions: