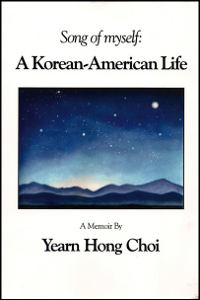 Song of Myself:
A Korean-American Life

a memoir by Yearn Hong Choi

Yearn Choi came to the US from Korean in 1968 to pursue a PhD in Public Administration at Indiana University. Already established as a significant poetic voice in Korea Yearn continued publishing poetry both in Korea and the US while teaching and writing in the changing field of Political Science. Yearn published widely in academic journals and op-ed pieces for newspapers from the Washington Post to the Korean Herald. He became the first member of the Pentagon to work on the emerging field of Environmental Policy. Yearn brings his passion, his involvement in the important events of his time, from the Vietnam War to civil rights, to the environmental and the significance of the immigrant to the American experience, into his writing.

"Artful, informative, heartfelt, provocative, and always engaging, Choi's memoir will prove an invaluable and unique contribution to American and Asian Studies by a seminal poet and incisive scholar. With Song of Myself:, Yearn Hong Choi immediately signals Walt Whitman. Yet he rivals Whitman in style and exceeds Whitman in scope."

From Song of Myself:

from Chapter 19
Defense and the Environment

In 1983, as I was winding up my two-year sojourn at the Pentagon, I was contacted by the editor of Defense magazine to write an article on the subject of defense and the environment. The magazine was a publication of the Department of Defense providing official and professional information to commanders and key personnel on matters related to Defense policies, programs, and interests, and to create better understanding and teamwork within the Department of Defense.

Not many people inside and outside the Department of Defense knew much about the existence of the Department's environmental management. So I accepted the invitation.

I produced the article in a week. Then, the editor responded: "This is the article I have been looking for the past two years." Environmental engineers in my office knew much about the subject, but they did not know how to write to meet an editor's expectations for a general public readership. They were very good technical writers, but they did not communicate splendidly with the people outside their field. I was proud of my contribution to Defense Magazine, which presented the views on the environment and public policy I had developed as a teacher, and then put into practice in the Pentagon. It might even have been the first article bridging the Department of Defense and the Environment, the two worlds seemingly far apart.

The Department of Defense's primary mission is to defend the nation. To many Americans, DOD is symbolized by people in military uniforms, fighters and bombers, aircraft carriers and submarines, tanks and missiles. But the Department of Defense is much more; it is a human organization concerned with the welfare of all the people and the environment they live in. It would make little sense for DOD to be building the defenses of the nation if in doing so it was threatening the health of our environment. To ensure that does not happen, the Department of Defense has a vigorous environmental protection program which has at its center compliance with all federal environmental laws such as the Clean Air Act and the Clean Water Act, the environmental laws of the 50 states, and more than 3,000 local laws and regulations. The importance of this compliance is underscored by DOD's responsibility for protecting the working and living environment for over 4.5 million military personnel and their families, one million civilian workers, and the environment of the land and water it controls.