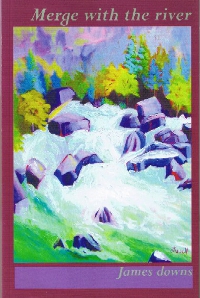 Merge with the River

Nominated for the Before Columbus Foundation, American Book Awards 2004

If you can find philosophy in rivers and trees, rocks and beasts James has done so. Here are the roots of natural philosophy of which sages old and new have spoken. First it is observed and then it is gotten up close to, soon the words come and they are the fine blending of that world out there and the poet's voice. But there are times when the blending is so complete that the two become one. James has taken us here. We go with him on the journey and we nod our heads along with him as nature gives up her philosophy when we give up ourselves.

"James touches something at once personal and yet with universal depth and appeal. His writing evokes a sense of his place in Yosemite and the world."
— Ed McCormick, photographer

"These poems will inspire anyone who lives to have a connection with the natural world. A truly wonderful poetic work"
— Ed Whittle, musician

"‘Take a short sweet walk' with poet James Downs. Come sit with him, in his forests, by his rivers. Find the simple truths that connect to all."
— Jo Maiorano, poet

James Downs lives and works in Yosemite National Park, California. A native Texan, James moved to the golden state in 1995 and happily calls himself a "permanent Californian." James produces a twice yearly on-stage writer's night, WORDS. James has produced a number of handwritten chapbooks and Where Manzanita in 2000 for Poetic Matrix Press In his spare time James reads copiously, roots for his sports teams loudly, participates in as many poetry readings as possible and hikes all over Yosemite.

From Merge with the river: