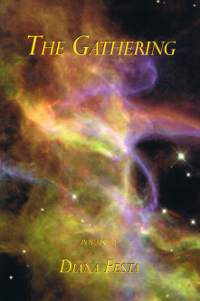 "Curl up by a fire with a glass of port to truly enjoy The Gathering. Ms. Festa opens up very difficult life experiences where she struggles to bring some kind of understanding. We don't see this in poetry all that often and it can make a difficult read to the uninitiated. But the beauty of her language and the depth of her understanding make her subject palatable and carry the reader to that place of truth and beauty to which poetry aspires."
— John Peterson, publisher and poet

"This whole book is an offering. And true to its title, it is a gathering, a gathering of souls, some of them called back from the land of shades. Among them I find my parents, the writers Robert Penn Warren and Eleanor Clark who were attached to Diana Festa and her late husband the French scholar Henri Peyre by powerful bonds of friendship."
—Rosanna Warren, from the Preface

Diana Festa grew up in Italy and came to the United States at the age of eighteen. She studied at American Universities. After earning a doctorate, she began her academic career as professor of French at Brooklyn College and the Graduate Center of The City University of New York. She is also a psychotherapist with a private practice.

As a poet, she has published four volumes of poetry, Arches to the West, Ice Sparrow, Thresholds, Bedrock, and numerous poems in various reviews.

Her honors include the Prix Guizot from the French Academy, a Guggenheim Fellowship, The Aniello Lauri Award, and several poetry prizes.

we were young together, our steps
on beds of leaves, the wood around us.

Swan visiting Leda, you covered me,
a god loving woman.

Memory rescues my day. I do something,
and the doing takes the shape of a dream.

We wrote our love on a white wall. I stand
this side of the door where our story stopped.

The way one goes on
as if nothing mattered,
maple branches that perilously lean
on the roof, water gushing in the basement—

and then, as if everything mattered,
as if all weighed the same on the scale,
the vegetables left to overcook,
the friend lying sick on his bed.

The way I go on,
dismissing calendars and sunsets as predators—
because I am angry with you
because you died.

Calendars persist, mark
time's tireless speed. They leave
dark spots on the skin, furrows
where hushed tears find a home.
The power of winds has molded
my face into a carved medallion
of ancient days.

I forgive your dying, it was not your fault.
You could no longer smell the honeysuckle,
and stumbled
on the black side of the sun—

while there was still light on earth,
while I still smiled
at the salty scent from the sea,
the irrepressible vigor of life.