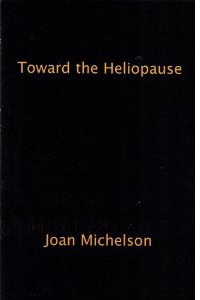 In 1997, Joan Michelson's husband, Geoffrey Adkins, a fellow poet, died unexpectedly on his way to work. The poems in Toward the Heliopause are a response to this event and a dialogue between her poems and his. Progressing through grief and recovery, the narrative follows shifts in perspective up to the tenth anniversary of the death. The reading is heart wrenching and glorious, full of love and loss and a deep look at a deep love. Anyone who has lost a loved one will find solace and tears reading Toward the Heliopause and will, I believe, find a moments recognition, where one's heart, though closed, may open.

"In an unflinching retracing of emotions and events, traveling a journey of breathtaking range, Joan's poems pursue the heart of loss. The reader learns alongside the writer about the nature of unexpected bereavement and the tenacious loving needed to face it and move on."
— Gillie Bolton, Medicine and the Arts, Kings College, London, UK

Toward the Heliopause was originally published in England by Mad Jock Publishers in 2007.
"2007 has seen three deeply affecting books written in English after the death of a spouse:" (one is) Joan Michelson's Toward the Heliopause.
— Books of the Year 2007, London literary critic Anthony Rudolf