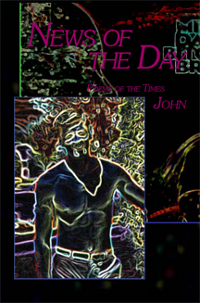 News of the Day

poems of the times by john

I call this collection News of the Day to indicate two things. First, some of these pieces were written for specific events; momentary poetic statements of the events of the day. The Social, written as a comment on the legacy of the left in the early days of Clinton's Presidency, was one of these pieces, as was 28 Years written after an invitation by Terry Hertzler to read at a Veteran's Day poetry reading. Second, some pieces were written with specific events in mind like Voice, written as a statement about Reagan's dirty war in Nicaragua. Certainly the piece written on hearing of the passing of Allen Ginsberg, that is the dedication piece, is one of these. And Impeachment, written about, what else, the Clinton Impeachment, took a long time to write and had to be concise given the excess of the thing itself.

The poems of the second section, Poems out of Philosophy, were written in the aftermath of September 11th and during a period of travel, mostly in the south. They seem to be more philosophical which, like poems associated with timely events, can lend a weight that if not handled well can crush the poetry. This is a chance I am willing to take to say what I feel need be said.

News of the Day review by Paul Dolinsky

From News of the Day: