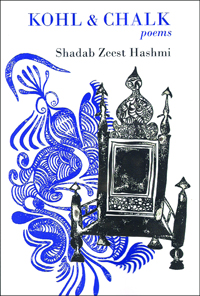 Shadab Zeest Hashmi is a Pushcart nominee and winner of the San Diego Book Award for poetry for Baker of Tarifa— a book based on the history of interfaith tolerance in Al Andalus (Muslim Spain). Her work has been included in the Seeds of Peace concert with the award-winning Al Andalus Ensemble, in the film Cruzando Lineas: Crossing Lines, and has been translated into Urdu by Pakistan Academy of Arts and Letters. She has presented her series of poems and photographs titled "Across the Windowsill" at San Diego Museum of Art. She has served as an editor for the annual Magee Park Anthology and the online journal MahMag World Literature and has taught as a visiting professor in the MFA program at San Diego State University. She has published her poetry and prose in numerous journals worldwide and represents Pakistan on UniVerse: A United Nations of Poetry.

The bride who contemplates her half paralyzed face on the eve of marriage (in the opening poem "Facial Palsy") is emblematic of the larger story of Pakistan: an ancient culture fractured by new and divergent identities. The poet, like the bride whose face is divided into "lit" and "dim" halves, gazes into the mirrors of history and politics to make sense of the disjunctive parts that refuse to come together as a whole. The very multiplicities of culture that the poet celebrates ("Socrates/mangoes cut in cubes," "Iqbal's poems on marble construction paper," "rouge from Paris, coconut oil from Orissa") are also the cause of dissonance ("War cries of the Greeks/ in plume red/Mongols/ in horse-leather red," "Gunga Din's ghost lifted from the tennis courts/of Peshawar Club")— dissonance that is further amplified in the post-9/11 wars to which a Pakistani-American response in poetry has thus far been absent. Kohl & Chalk is that response in the voice of a daughter, a mother, a global citizen.

After traversing the storied streets of Al-Andalus in Baker of Tarifa, poet Shadab Zeest Hashmi turns her gaze inwards in her latest collection, Kohl & Chalk (Poetic Matrix Press, 2013). This deceptively slim volume carries a substantial cargo. In just over fifty poems, Hashmi unpacks the ravages and accidental gifts of history from her country of birth (Pakistan) and her adopted country (America), and weaves these into a loose tapestry that stretches across time and continents. Much of this journey in verse is framed as a continuing internal conversation with herself, her family, her past, and often with her conscience, and it soars along the wings of a brilliantly original poetic voice.