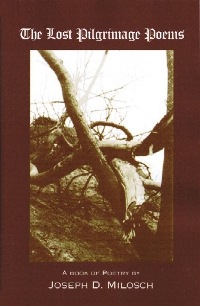 a book of poetry by Joseph D. Milosch

front and back photography by Brandon Cesmat

"The poems of The Lost Pilgrimage are by a man who notices what happens. How rare that kind of listening is. Whether writing about his father, the war in Vietnam, his wife, childhood, work, fishing, faith, illness, silence, or anything else, Joe Milosch hammers dross away and leaves nothing extra. What's left is a hard-won gift and blessing for the reader willing to open this book, enter these poems and join the journey."
—John Fox, CPT author of Poetic Medicine: The Healing Art of Poem-making

Joe Milosch graduated in 1995 with his MFA from San Diego State University. He has published poetry and essays in various magazines over the past ten years. His first chapbook, On the Wing, was published by Barnes and Noble as a regional publication; his second chapbook Father of Boards and Woodwinds, was published by the Inevitable Press for the Launa Poets Series. He was a finalist in the Tennessee Middle State Chapbook contest in 1996 for his chapbook, If I Could Imagine. He won the 1997 Tennessee Middle State Chapbook contest with his chapbook Among Men. In 1999 the Laguna Poets Series published his fourth chapbook Now She Bends Away on Inevitable Press.

From The Lost Pilgrimage Poems: