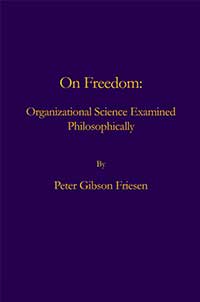 Regardless of where you enter the discussion of Freedom there is an underlying matrix of moral and value connections that link any domain of social activity with all others. Although billed as an "abstract philosophical discussion," it is fundamentally important for all of us to get a handle on how these connections work.

Excerpts from the Preface

"In the process of making this inquiry, "freedom" begins to stand out as interesting in its own right, and benefits from theories about how individuals develop the capacity to think, feel, cooperate and worship. The fact that we experience and break through confinements, and become better than what we were before, is a more interesting way to examine human development than drawing status comparisons between persons. An emphasis on the transcendence of boundaries—not their obduracy—brings the examination of human development close to what most people mean when they use the term "freedom." "Freedom" denotes ethical elevation along with the easing of restriction.

"Freedom prompts us to wonder about what is valuable in the appropriation of a moral code. How does it reflect goodness? In what sense is existence affirmed by it, and how, by knowing its limits might we transcend them? Without an interest in freedom, such questions are not asked, and therefore not answered."

"It is difficult to say what it means to examine something philosophically, except to draw upon a philosophical tradition and endeavor to evaluate assumptions behind a given perspective with depth and honesty. Philosophical labeling, at least in my view of things, tends to divert one's critical faculties from the task at hand. In this book, it is about assisting a scientific dialog with the development of some measure of clarity about what is known and what is not. If science assumes that the nature of things reveals an ethical void, that assumption is not effectively examined scientifically, but philosophically. In that sense, philosophical assessment is the principal mechanism by which the term "freedom" can be considered meaningful."