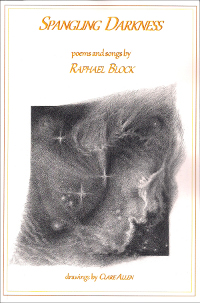 Born on a kibbutz in Israel to pioneering parents, Raphael Block spent his boyhood playing on the hills of Haifa. Just before turning nine, his family returned to London. Learning English shaped his ear for sounds, and the British climate and temperament fashioned his life over the next 25 years, until he met and married an American living in London.

In 1993 they moved to Northern California with their daughter. His partner died from cancer in 2002, and for the following years he feels it was his privilege to raise their child.

Raphael has worked with children of all ages for almost 30 years. A long time meditator, he breathes in wonder at the earth's and our own rhythmic ebb and flow. He dwells in an old apple orchard outside of Sebastopol, and is often accompanied by musicians when performing.

Raphael suffers with Chron's Disease. He says of this, "It has been a great teacher, forcing me over the years to pay attention to messages from my gut and relate to my emotions in a fuller and more conscious way. In 2008, after surgery, Chron's swept into the forefront of my life. Not only did I have to retire, but much more difficult has been the process of learning to lovingly care for myself. Leading life at a much slower pace is great for observing, writing, and being. The daily opportunities for gratitude and amazement seem to multiply with a life-threatening illness."

"Raphael's voice is a tool for sanity and survival in a world where hazards keep appearing on our path... The poems in both Songs from a Small Universe and SPANGLING DARKNESS illuminate his love for life and engagement with the natural world and with the community. SPANGLING DARKNESS ignites the imagination for a new vision that allows the earth to mend. This is the gift of Raphael Block as a poet whose spirit resonates in our common humanity and binds us together."

— J. GLENN EVANS, from the Foreword

"The poems in SPANGLING DARKNESS breathe with a remarkable sensory awareness that brings a reader as close as one can get to daily life. This is where Raphael Block begins to work magic as a poet... Connections and mysteries come to meet me with a capacity to awaken within me a spiritual consciousness fallen asleep through lack of attention. It is as if these poems are companions that know both the corner store and that other world."