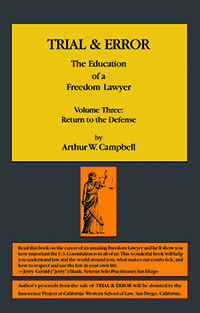 The Education
of a
Freedom Lawyer

Volume Three:
Return to the Defense

Arthur W. Campbell was born in Brooklyn, raised in Appalachia, and scholar-shipped to Harvard and Georgetown Universities. Prior to earning his law degrees, he was a road-maintenance worker, janitor, boxer, rugby player, and professional musician. He then became a trial lawyer for and against the government in Washington, D.C. Campbell's poetry has won various prizes and been published in literary magazines and anthologies throughout the United States. Married to the novelist Drusilla Campbell, he now teaches at California Western School of Law in San Diego and trains horses in Lakeside, California.

Poetry. The first book in Campbell's critically acclaimed trilogy saw him as the country's first law student to argue a case before his state supreme court. The second book witnessed him convict (and then free) an innocent man as a prosecutor in Washington, D.C. The current volume returns Campbell to the defense, tracks his transition to teaching in California, and culminates with his defending his wife and others in "California versus Drusilla Campbell." It was the largest mass-protest trial in San Diego history.

"Volume Three of TRIAL AND ERROR vividly captures the middle and later years of a "freedom lawyer." Campbell reveals how citizens get snared by the legal system and how this impacts the client, the lawyer, and society. Campbell shares his commitment to rights enshrined in our Constitution and Bill of Rights— plus the importance of protecting and defending these rights."

"Buckle up — you can't learn this stuff in a law book! At the turn of every page I discovered something that would otherwise take me years of my own trials and errors to understand. More than just courtroom stories, this book makes you reflect on your own life's journey. Thanks to Campbell we can all become better students of life. I want my own [life] to contain as much insight and vigor as he has for practicing and teaching freedom law."