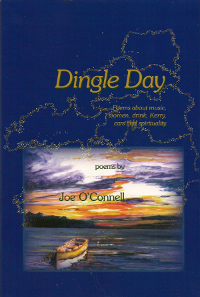 In Dingle Day poet Joe O’Connell flies with the best of the Irish literary tradition; reverence for the Irish countryside; for the Irish people; taking on big themes — life and the nature of living. He lets his language go, invents words, delights at time in the pure sound of words, in the pure sound of sound. He is not afraid to break the norms hence the sub title, "Poems about music, women, drink, Kerry, cars and spirituality." All of the time he celebrates, over and over he celebrates, but never leaves his art: "I suppose art creates something new/Itself nonetheless part of reality."

Joe O’Connell holds a Ph.D. in biochemistry and is a Senior Lecturer in the Department of Medicine at University College Cork, Ireland. Editor of RT-PCR Protocols (2002), he has contributed numerous articles and reviews to scientific journals. O’Connell was awarded a Centennial Prize for Academic Publishing in Medical and Health Sciences by the National University of Ireland in 2009.

A native of Portmagee, County Kerry, O’Connell resides with his wife and son in Cork City. Dingle Day is his first published collection of poetry.