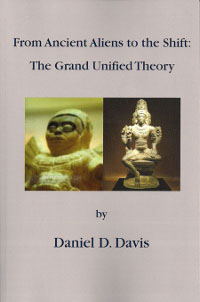 From Ancient Aliens to the Shift: The Grand Unified Theory

Available via PayPal through
the Publisher at our Book Club

There are countless books, television programs and film documentaries which present convincing arguments purporting to prove that we are being visited by an advanced civilization not of this planet. This book begins by presenting a sampling of the cases that no one has been able to explain away since the modern era of UFO sightings started in 1947. What makes these so convincing is that they are the kind of events usually seen by credible witnesses from the air, from the ground, on ground-based radar, or on airborne radar — and often all at the same time. These are chronological and geographical representations chosen purposely to show that such occurrences have been continuous and global. This book also analyzes the reasons for why are we not hearing the complete details regarding what people are seeing. As will become clear, it is certainly not for a lack of trustworthy testimony, or because the governments of other countries have not been more forthcoming with such news to their citizens.

From Ancient Aliens to the Shift further explores the obvious question: If these visitations exist, when did they start? Once again, unusual artifacts and legends from all over the world, and from cultures that span the millennia since the first organized societies, show that humans may not have been the smartest species in the celestial neighborhood for tens of thousands of years.

Another major topic discussed is why any extraterrestrial civilization that might exist has not yet established full and permanent diplomatic ties with us. Considering what we might represent to them also gives us an atypical insight into all the predictions — the dire ones as well as more positive prospects — regarding what may occur or begin in the near future. This book also looks in detail at the most positive outcome we might expect from whatever may commence in 2012: A spiritual shift that could be the most beneficial event in history for everything and everyone on the planet. The various signs of this impending human enlightenment could give us not just optimism, but a reason to eagerly anticipate what might soon transpire on Earth.

Daniel D. Davis has led a life that many have said would make a fascinating autobiography, beginning with a childhood where he spent eight years growing up in Ecuador. His career teaching secondary mathematics (through A.P. Calculus) and Spanish also took him from California and Nevada to Congo, Romania, and Pakistan. In the process, he has lived on five continents and been to 36 countries, where he could be found B.A.S.E. jumping, skydiving, paragliding, hang gliding, scuba diving, rappelling, bungee-jumping, snowboarding, skateboarding, exploring, fishing, camping, backpacking, riding bicycles, horses, elephants, and camels, training in martial arts, or playing guitar and singing with the locals.

Wanting to communicate more freely with the people he has met around the world, Davis has learned to speak Spanish and Romanian fluently, can get by in French, and has studied or understands several other languages.

In addition to his teaching experience, the other professions into which he has delved are as varied as his personal interests: Nuclear artilleryman in the U.S. Army, professional demonstration skydiver, California Notary Public, Certified Loan Document Signing Agent, College Learning Resource Center Coordinator, Financial Analyst, health information presenter, self-employed businessman, and over 35 years playing guitar and singing with bands or in solo performances. The myriad professional and recreational pursuits that Davis has had are reflected in his various writing projects: Aside from the upcoming From Ancient Aliens to the Shift: The Grand Unified Theory, he has also had an essay published in the book A World of Teaching: Personal Journeys Through the World’s English-Speaking Classrooms, and several articles in magazines or trade journals.