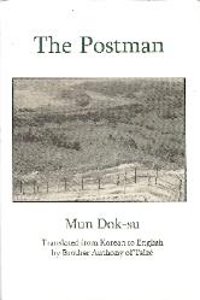 Translated from Korean to English
by Brother Anthony of Taizé

The Postman is Mun Duk-su's latest output, which is a product of the period when his thoughts on life and the world and his notions on poetry are fully matured. He tries hard to find in the psychological and historical sites the roots of irrationality such as war, massacre, terror, and other anti-humanistic alienation phenomena, and transform them into clear physical images. He, on the one hand, searches out the root of "the lust for power," which can be said as the root of every modern irrationality, in the human mind, and on the other hand, finds the source of the conflict between the east and the west....

"There are few modern Korean poets who have pursued change as ardently as Mun Dok-su has done. In his early days, he wrote Modernist poems engaged in the pursuit of ontological issues, under the influence of Yu Ch'i-hwan. But before and around the turn of the 21st century, as the spirit of the times were changing, he developed an interest in the environmental issues associated with the so-called DMZ and produced works that were deeply marked by Postmodernism. Nowadays, however, refusing to be satisfied with that, he has chosen a method of composition deriving from Modernism and has brought into the world a poem in cantos close to an epic, "The Postman: Reborn, I Want to Become a Postman."
— from the Commentary by Lee Tae-Dong.