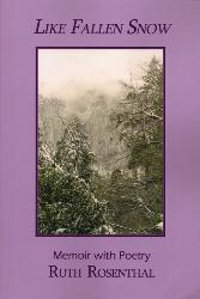 Once again Ruth Rosenthal has given us her bright, jewel- like poems, this time matched to moving, often funny memories. Memoire speaks to poem, poem to memoire, sometimes as contrast, sometimes as echo. As readers we gain access to meaning and rich intriguing characters. Then the forms like sonatas and etudes in music connect our thoughts and feelings to enrich our reading pleasure.
— Jeanette Bryon, Professor Emerita, California State University, Fresno

Ruth put aside a scholarship to Newark State College, in New Jersey, before making California her home. Twenty years later, after taking all the available non-credited writing classes she could find, Ruth went back to college, selecting literature, poetry, short story writing, psychology, sociology, art history, and art. Ruth was staff writer for Kaleidoscope, the publication of the Peninsula Poets Guild in Northern California, and poetry judge for The Write Place. She taught creative writing, and established a poetry group for psychiatric patients at Marin General Hospital, merging with the art director's class. Amazing changes came about as patients, some who had never written before, expressed their deepest feelings and discovered their own hidden joy.

The Temple Where Little Girls Worshipped

As far back as I can remember, I was enchanted by the precocious, talented, smiling personality of Shirley Temple. I had a blue cup made of glass which had her picture on it. I wouldn't drink my milk unless it was in my Shirley Temple cup. Her picture was barely visible after the many times my mother had washed my special cup for me. But that didn't matter to me. It had to be that cup. A generation and a half later, it was with a mixture of feelings that I heard Shirley Temple Black would be visiting the auditorium of a company I worked for. After her talk I went to meet her. Her right hand was bandaged. As I began to briefly mention my childhood devotion to her, I became more concerned about her in the present and asked what happened to her hand. She laughed and told me how a huge Texan had told her what a fan of hers he was, as he crunched her small hand in his massive one. In his zeal it must have taken very little to give her a sprain. As she offered her left hand to me it seemed very small and vulnerable to me in my not so large hand.

I left the auditorium thinking about what someone had done to her. It was innocent. It was out of enthusiasm for her as a personality. I doubt she would remember our brief meeting. But I'm sure she remembers him.